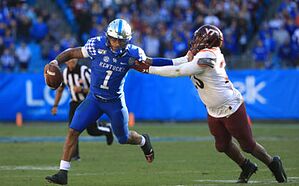 CHARLOTTE, NORTH CAROLINA – DECEMBER 31: Rayshard Ashby #23 of the Virginia Tech Hokies tries to stop Lynn Bowden Jr. #1 of the Kentucky Wildcats as he runs with the ball during the Belk Bowl at Bank of America Stadium on December 31, 2019 in Charlotte, North Carolina. (Photo by Streeter Lecka/Getty Images)

After the conclusion of the national championship game, it’s official, Lynn Bowden Jr. is the leading rusher in the SEC for the 2019-2020 season.

There was perhaps no better fairy tale in college football this season than Lynn Bowden Jr.

He was the alpha, the leader, the champion. And now he continues to reap the respect that he so dramatically deserves. 2019-2020’s SEC rushing crown is coming home to Kentucky.

Despite being Kentucky’s leading return man and receiver, Bowden earned the SEC’s top rushing honor, amongst some of the greatest running backs in the conference. After making a sudden switch to quarterback five games into the season, the junior would end up totaling 1,468 rushing yards.

Bowden refused to accept normalities, he did it all, and he did it well.

He defied the idea of having a non-traditional quarterback play the position for an extended period of time. In his time at quarterback, he won six of eight games.

He defied the idea of having a quarterback predominantly pass the ball. He passed for 403 yards on 74 attempts, while rushing for 1,468 yards on 185 attempts.

He defied the idea of a running back owning the rushing record. The receiver turned quasi-QB was the SEC’s #1 rusher, beating out LSU’s Clyde Edwards-Helaire (a National Championship-winning running back who played in two more games than Bowden), Alabama’s Najee Harris, and Georgia’s D’Andre Swift.

But before we bore you, understand this: Bowden did it all in essentially eight games.

What Lynn Bowden did for this Kentucky team is unprecedented in school history. No one man put on a more remarkable stretch of games than Lynn Bowden Jr. did, and for that, we thank you.