Tomorrow Kentucky will host Missouri at Rupp Arena in the first SEC game of the season. Here our Wildcat Blue Nation’s biggest leftovers before the Wildcats begin conference play…

Leftover #1: Which Kentucky will we see? 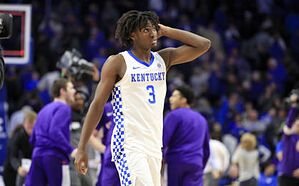 LEXINGTON, KENTUCKY – NOVEMBER 12: Tyrese Maxey #3 of the Kentucky Wildcats walks off of the court after the 67-64 loss to the Evansville Aces at Rupp Arena on November 12, 2019 in Lexington, Kentucky. (Photo by Andy Lyons/Getty Images)

Kentucky Basketball did not form much of an identity throughout non-conference play. The Wildcats leaped out of the gate, beating then #1-ranked Michigan State, only to be embarrassed in perhaps the (statistically speaking) worse loss in the Calipari era – a three-point defeat to Evansville in Rupp Arena.

Then, until late December, the Cats flirted with – but ultimately avoided – disaster against weak non-conference opponents, the toughest of which was KenPom #94-ranked Georgia Tech. After this, the Wildcats lost two straight: a poor performance against Utah and a battle ultimately decided by the charity strike against then #5 Ohio State.

Finally, in the last non-conference game of the season, the Wildcats defeated #3 Louisville in a thrilling overtime victory, 78-70. Without this win, the Cats would be sitting at 8-4, the worst start in the Calipari era. Instead, the Wildcats look rejuvenated, determined to knock off the nation’s best.

But that leaves us with one question, which Kentucky team will we see the rest of the way?

Will we see the gritty, determined, shot-making, and shot-searching Wildcats that defined this team’s victories against two top-three opponents? Or will we see the deflated, uninterested Wildcats that surrendered losses to a top-100 and top-200 team?

Well, that remains to be seen. SEC play is markedly different from non-conference play.

The pace is faster, the importance of individual games are easy to look over, and every opponent will sell out their crowd, hoping to draw blood on a night the Cats may not be ready. This is the type of play that prepares a team for March. And, even in a down year, the SEC is much improved.

If you haven’t noticed by the increasing number of teams making it to the NCAA tournament from the SEC or the improved recruiting rankings across the board, this conference is no joke.

So, now to the question: which Kentucky basketball team will we see?

I do not believe we will see much different of a team today than we do in March. Let it be known, we say “today” on purpose. This specific word has a very important meaning. We will see the Cats that just came off of a win against the #3 team in the country. We will see a team that generally cares about each other and about winning ball games.

That being said, this team, today, carries baggage.

They have holes, some of which are quite glaring. They will lose a head-scratcher or two.  But, this team will continue to improve and be passionate in the games that matter. Just don’t be surprised when they let a couple slip, this team is not invincible by any stretch of the imagination.

Next: Leftover #2
Next1 of 4Prev post
Use your ← → (arrows) to browse
Event Tickets
Powered by StubHub
Top Stories